Day 2 of Run It Up Reno VIII is in the books and while players were buzzing after a fun opening day, everyone knew it was time to get down to business and try to lock down a coveted piece of RIU gold.

The day began with SNG satellites, and players earned themselves buy-ins for Day 1B in the final flight of the $440 Mini Main Event. Moving on into the early evening, players had a chance to battle for a trophy in the $125 6-Max NLO8. Four cards, split pot and no cap on betting – what could go wrong?! Finally, fearless RIU leader Jason Somerville hosted a Cash Game Hangout in the poker room for Fight Night 236 to catch some UFC action and play some 1/2 Pot Limit Omaha. 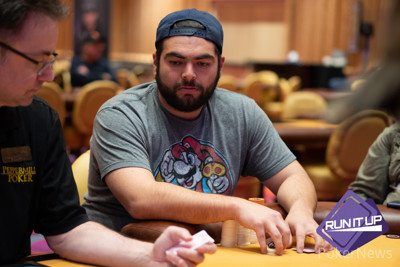 Day 2 begins today at 12PM and will play down to a winner, with a feature table on the Twitch broadcast beginning at 5PM PT leading into the final table to cap off the night.

The third day of RIU Reno VIII has already kicked off with satellites, and is slated to be a fun(ny) one with the Stan-Up Open Mic Night being held in the Sorrento Ballroom to end the night. Here is a look at the schedule for the day:

A full schedule and list of structure sheets can be found here.